After finding a great selection of named bricks at Cawarden Reclamation on my last visit, a second trip to Rugeley was always on the cards. So in April 2015 on a glorious day, I revisited the yard & here are some of the finds from that day. 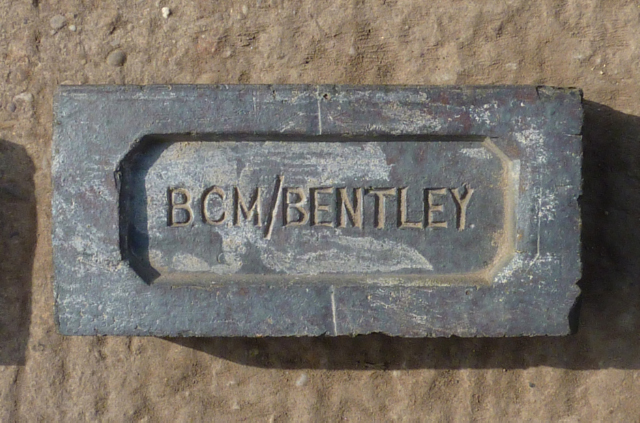 BCM Bentley - The BCM stands for British Clay/Ceramic Manufacturers & was a trade organisation which included many brick companies throughout the UK & was operating in the early 20th century. As well as producing bricks stamped with their own name, all of these companies produced a percentage of their output with BCM before their company or trade name. Very little information can be found on the web for BCM, but I have found an organisation which operates today called the British Ceramic Confederation, who advises & promotes all clay related products & companies. So I am taking it that BCM was the forerunner to BCC.
http://www.ceramfed.co.uk/members/bricks-clay-roof-tiles--drainage-pipes/

Updated 26.1.18.
I have just been informed that I had got the location wrong for Bentley Tileries works, so I have updated the entry with a new map & info received from David Kitching. Many Thanks David.

Formed in 1928 Bentley Tileries Ltd works was situated at Longbridge Hayes, Stoke on Trent & was operational between the late 1920’s & 1968. In the 1960's the works consisted of around ten beehive kilns. In 1963/4 the works produced roof tiles, red floor tiles, garden tiles & air bricks. After the works had closed in 1968 the site was immediately cleared of all buildings. 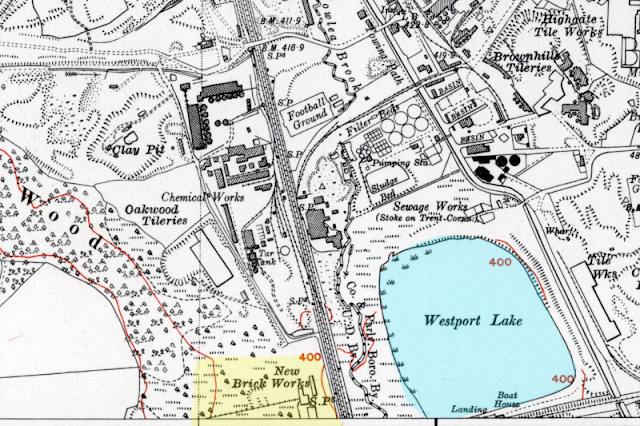 1938 OS map showing the location of Bentley Tileries works & is marked as the New Brick Works. The continuation of the tramway, the clay pit & Longbridge Hayes is just off the bottom of this map. This former brickworks site is now situated within the Longbridge Hayes Industrial Estate sandwiched between the A500 & Westport Lake. 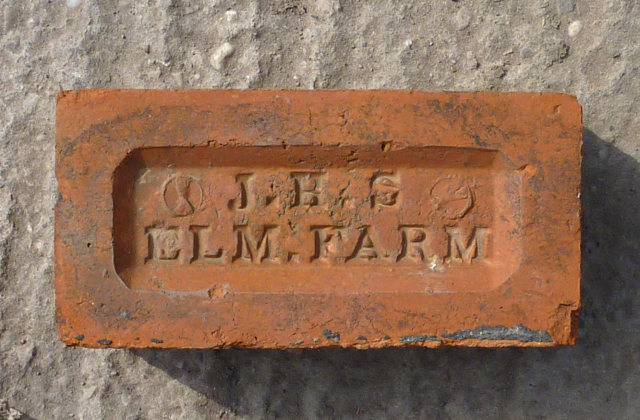 Around 1867, William Shepherd is recorded as Coal Merchant at Union Wharf, Bilston Road, Wolverhampton. He then started manufacturing bricks around 1892 on Granville Street, Wolverhampton with him then moving to the Elm Farm Brickworks on Dudley Road in 1896. Two years later he opened a second works called the Phoenix Brickworks, also on Dudley Road. William was well regarded & respected by the local business community & he went on to build 500 houses around Wolverhampton, providing them for the working classes. William also established a cycle manufacturing business in the town. William is recorded in Kelly’s 1892 edition as brick manufacturer on Granville Street & living on Bilston Road. Then from 1896 to the 1908 editions he is listed at Elm Tree Farm Brick Works, Wolverhampton. With this brick being stamped JHS Elm Farm, I can only suppose that these are the initials of his son or brother ? I have found a reference to J.H. Shepherd, deceased in 1908 & the disposal of the Elm Farm Brickworks, his home & estate on the National Archives web site. I have two other photos of bricks from this company, one is marked Phoenix & the other William Shepherd, Phoenix Brickworks. 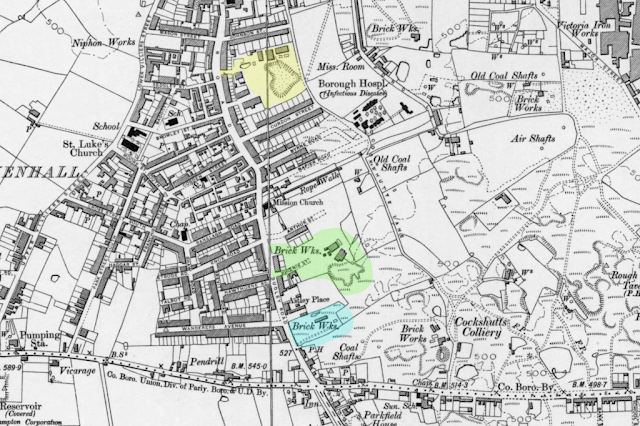 © Crown Copyright. Reproduced by permission of NLS/Ordnance Survey 1900.
On this 1900 map I have marked the Phoenix Works in green, with the entrance to this works via Phoenix Street from Dudley Road. I am not 100% sure of the exact location of the Elm Farm Works, but it could be the area which I have marked in yellow. Today's Elm Farm Road now runs from Dudley Road into the yellow area. Another option is the other Brick Works marked on Dudley Road, which I have coloured blue. 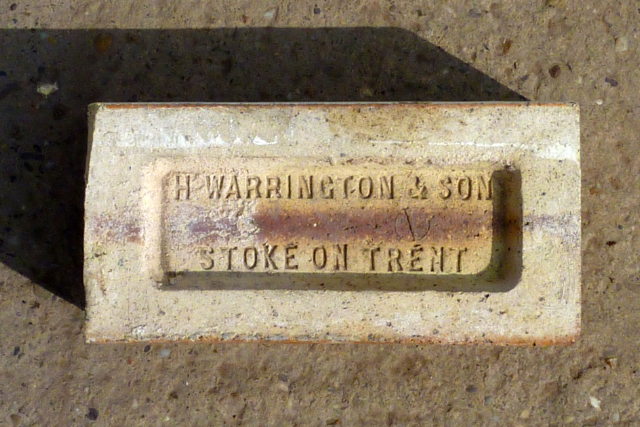 H. Warrington & Sons works at Berry Hill, Fenton, Stoke on Trent is recorded in Kelly's T. D. from 1896 to 1908 editions. Henry was born 1838 in Cheadle & left school at the age of 13 in 1851 to work for William Bowers who operated Berry Hill Colliery. An associated brickworks had been established by 1870. Henry worked his way up the company eventually succeeding Bowers as the owner of the business some time not long after Bower's death in 1880. The business also included an iron works at Berry Hill but the forges closed around 1900. Henry Warrington employed 1000 men, farmed 400 acres & lived at Fenton Manor House. Henry tragically shot himself on the 2nd of March 1907. After Henry's death the colliery & brickworks are recorded as being owned by John Slater in 1914 with John then forming John Slater Limited in 1918 & this new company also included another colliery at New Haden. Slater's company is next recorded as Berry Hill Collieries Ltd. in the 1920's. I have two entries in Kelly's T.D. in 1928 & 1932 for Berry Hill Collieries Ltd, Berry Hill Brickworks, Stoke. In 1947 the brickworks became a separate company & was renamed Berry Hill Brickworks Ltd. with the colliery being nationalised in that year. This new company expanded in the 1960's & was operating four brickworks. The Berry Hill works closed in the 1970's thus completing 100 years of brick production at the works. The site of the former brickworks is now Fenton Industrial site. 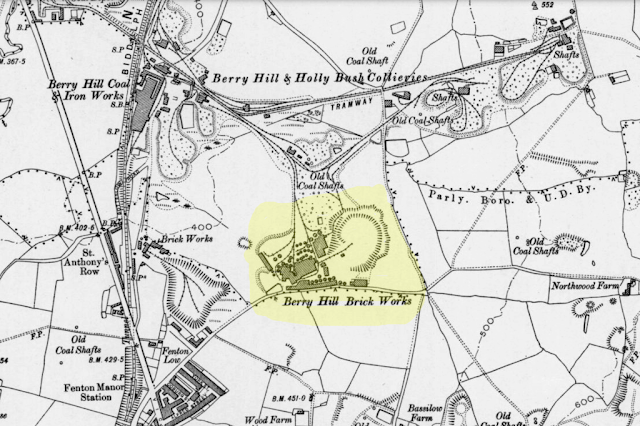 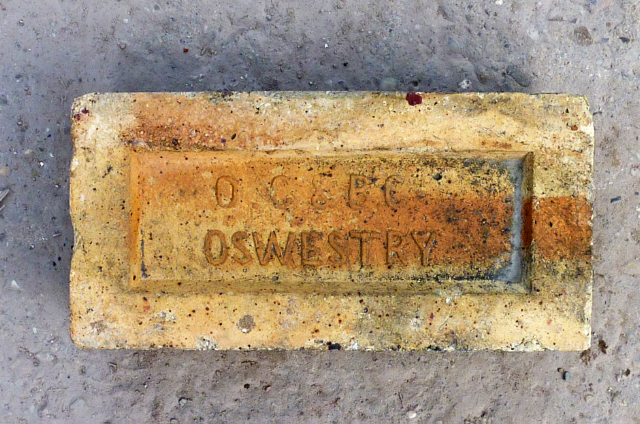 The Oswestry Coal & Brick Co. operated the Drill Colliery & Brickworks at Morda, Oswestry & in the early 1870's the company owned by Stanley Leighton acquired nearby Sweeney Colliery & it's brickworks. On the O.S. map below I have coloured Drill B/W's in yellow & Sweeney B/W's in green.
Brick production appears to have then been moved from the Drill brickworks to the Sweeney site & this works was then expanded. O. C. & B. Co. then became the Sweeney Brick Co. around 1880.
The lease & the name of the works changed many more times before the works finally closed in 1926.
These were :-
Kelly's 1891 edition, Kay & Hindle Ltd. Sweeney Brick & Terra Cotta Works.
Kelly's 1895 edition, Oswestry Brick, Tile & Terra Cotta Co. Lim.
1899 to 1907, Sweeney Blue Brick & Terra Cotta Ltd.
1907 to 1909, New Sweeney Blue Brick & Terra Cotta Ltd.
1911 to 1915, Sweeney (Oswestry) Brick Co. Lim. In Kelly's 1913 edition there is an entry for the company with C.E. Williams as secretary & managing director.
Then the name of the works at it's closure was the New Sweeney Brick & Tile Co. Ltd.
Today houses are built on both brickwork sites. 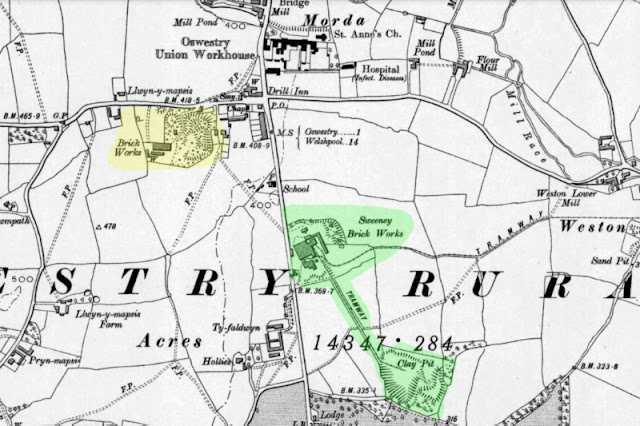 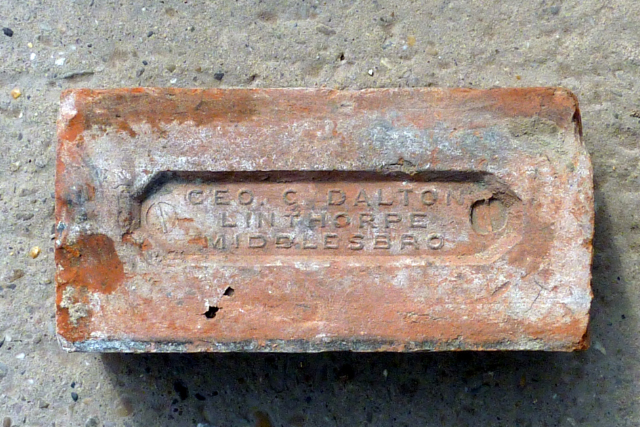 George Grubb Dalton, Brick Manufacturer, Builder & Contractor, Linthorpe, Middlesbrough is recorded in the London Gazette as giving Notice of Intended Dividends on the 13th November 1888. In this Notice George is listed as residence at Cambridge Road, Linthorpe & trading in Linthorpe, in Middlesbrough & all of Yorkshire. 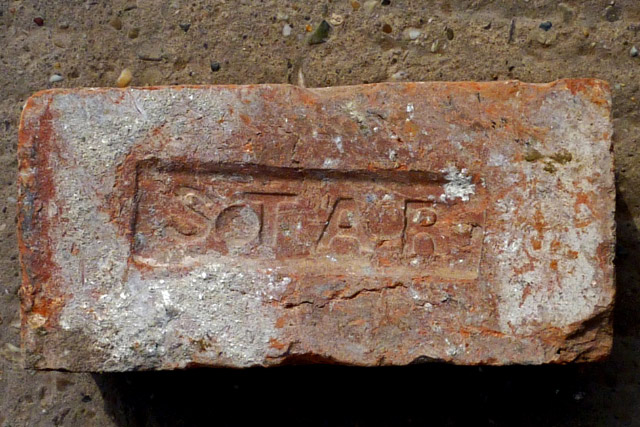 George Ball is listed as owner of the Star Brick Works in Linthorpe, Middlesbrough in Bulmer's 1890 edition. 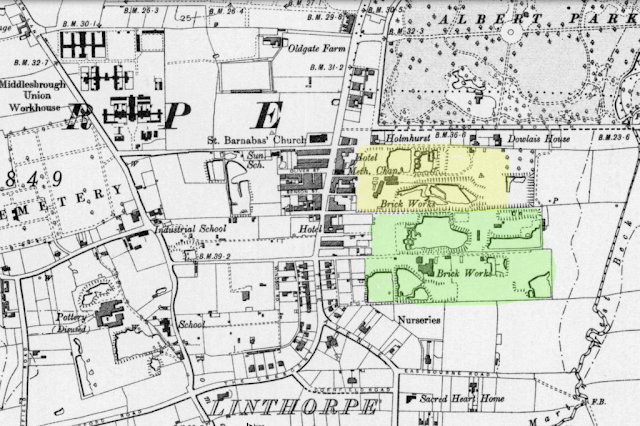 This 1900 O.S.map has two brickworks marked in Linthorpe, Middlesbrough of which one could have been owned by G.G. Dalton & the other by George Ball, owner of the Star Brick Works. 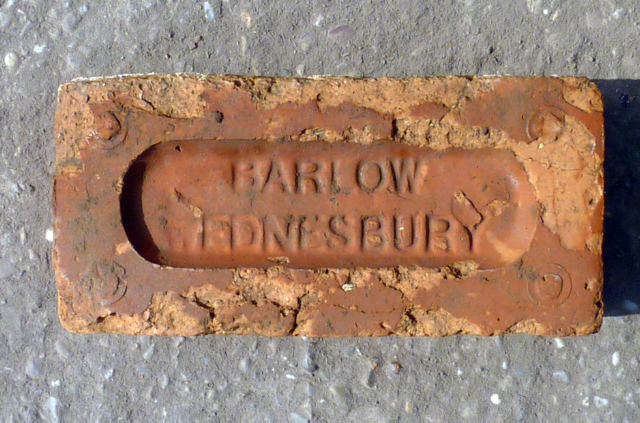 Barlow, Wednesbury, no info found for this company. 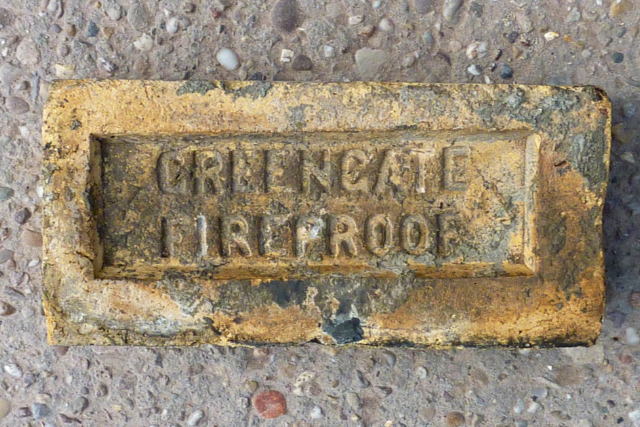 The Greengate Brick & Tile Co. was in St. Hellens, Lancs. with the company also owning Greengate Colliery. The O.S. map below shows the location of the works in 1900 & was situated close to the vast Ravenshead glass works owned by Pilkingtons. The brickworks was to later become part of Pilkingtons. This link contains an ariel photograph of the works in 1923. http://www.britainfromabove.org.uk/image/epw009300 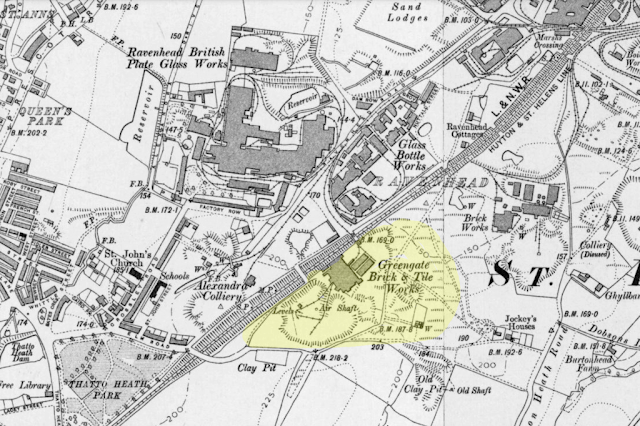 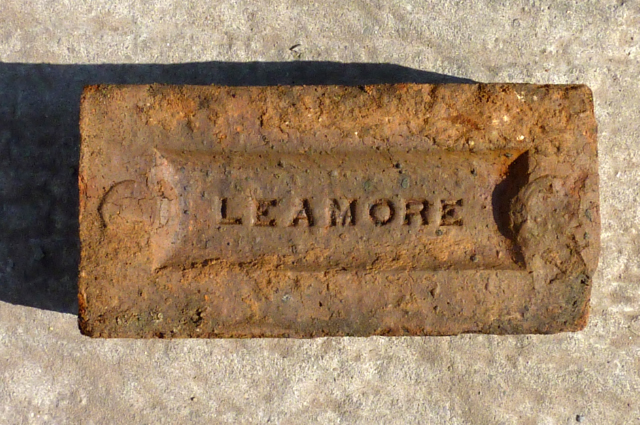 The Leamore Brick Co. was on Green Lane, Leamore, Walsall & was situated on a 6.5 acre site adjacent to the Wyrley & Essington Canal as shown on the 1900 O.S. map below. The company is listed in Kelly's 1908 & 1912 editions at Birchills, Walsall. 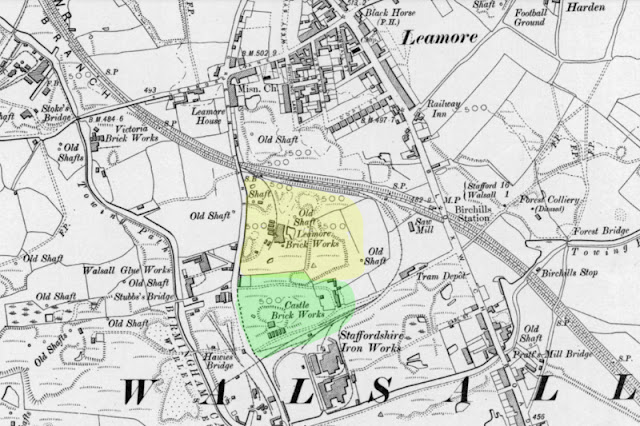 Also marked next to Leamore  B/W's on this map is Castle Brick Works which I wrote about in my first Cawarden post & can be read at this link.
http://uknamedbricks.blogspot.co.uk/2014/12/cawarden-reclamation-yard-rugeley-staffs.html 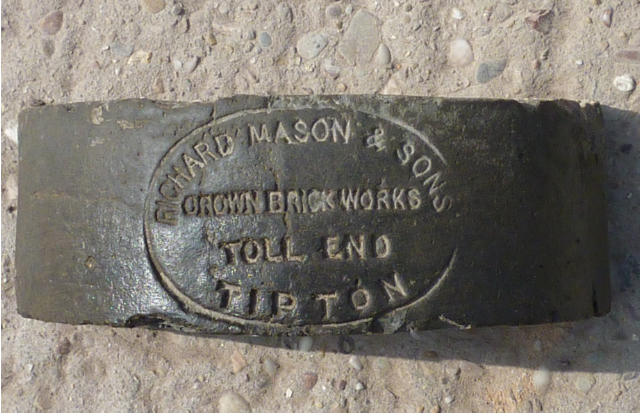 Richard Mason & Sons, Toll End, Tipton are first recorded in Kelly’s 1884 edition, then the entry from the 1896 edition to the 1916 edition is Mason Ltd, (blue & red), Toll End, Tipton. Marked Crown Brickworks on this 1900 map below, the site is now occupied by Western Power Ltd. on Toll End Road & the former clay pit has now been transformed into Bayley's Pool. 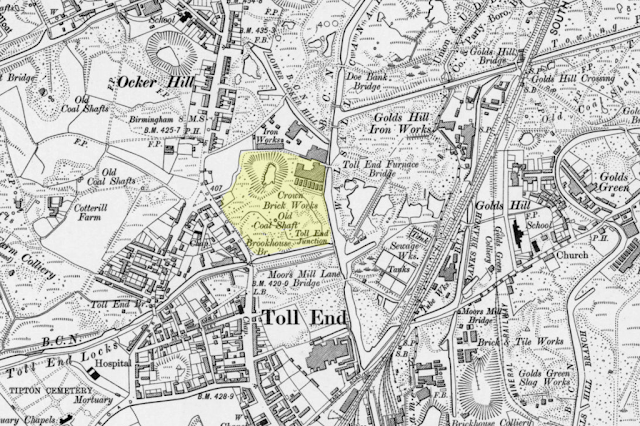 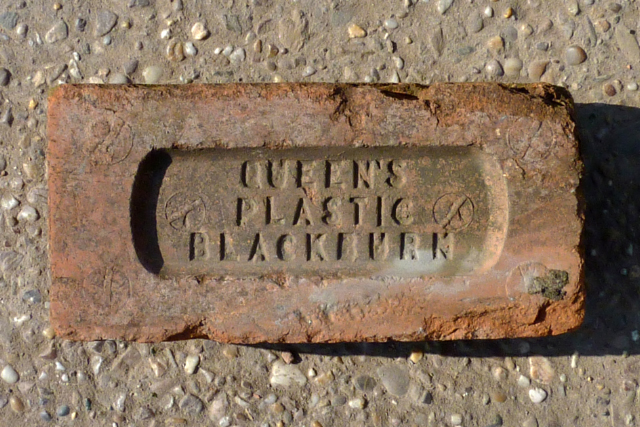 The Queen Red Facing Brick Co. Ltd is listed in Kelly's 1901 trade directory at Rishton, Blackburn & is shown on the 1900 O.S. Map below. This company appears to have been an unsuccessful venture & was reformed in 1907 by George Knowles as the Queen Brick Co. (Blackburn 1907) Ltd. This set up also failed & went into liquidation in 1909. Today the former brickworks next to the Leeds & Liverpool Canal is open fields with the Whitebirk Industrial Estate situated close by (in the area between the two marked Old Shafts on the 1900 map). The Great Harwood Loop railway line marked on the map also no longer exists. If you check out Google maps you can see that some houses & industrial buildings now occupy the land near to the bottom of the former tramway which ran up the hill to the clay pit & these buildings are accessed via Side Beet Lane. Martyn Fretwell / Gingerbenn
You may have asked why I have named my Days Out blog - Gingerbenn. This was my nickname way back in 1975. The hair has nearly all gone now, but this photo still makes me smile. So if you are on one of my brick sites, please take a look at the places I have visited at - http://gingerbennsdaysout.blogspot.co.uk via my links tab.